Colwyn Bay...Conwy council investigated 0.6 per cent of fly-tipping incidents in 2021-22 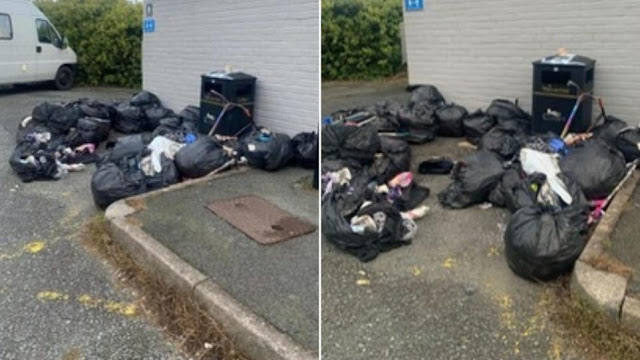 And our forced monthly bin collections don't help either! Most people I know have given up reporting Fly-tipping!

After the local authority team cleared about 20 bags of rubbish dumped in the public space on October 14, Cllr Jones sent an email to the council asking if a relevant official would be viewing the CCTV footage from the cameras in the car park, with the intention of identifying the perpetrator(s) and pursuing enforcement action.

Despite the email having been acknowledged on October 18 by the Environment, Roads, and Facilities department, the Regulatory Services department issued an email on November 2.

This said: “Due to an IT glitch in our system, we only received the email on Monday, October 31.

“Our CCTV retains footage for a period of 14 days; regrettably, in this instance, we cannot ask for a review of the footage”.

“It should not be necessary for a concerned member of the public or councilor like me to have to request that CCTV footage is checked.

“Whilst I am very grateful to the officials who cleared the litter, if our local authority was taking fly-tipping seriously, they would be checking available CCTV footage without delay nor requirement for a request for action by the public.

“Residents like myself have been volunteering for years to litter-pick. We deserve a local authority that uses all the levers at its disposal to catch those who are polluting our environment with waste.

“As it stands, despite 1,447 fly-tipping incidents in 2021-22, the local authority only investigated nine. That’s less than one percent.

“Residents of Llanrwst and Conwy County should have a much better service than this”.

Cllr Jones is now liaising with the community to try and ascertain around what time the fly-tipping incident in Llanrwst happened so as to assist the council in its review of the CCTV.

In response, a council spokesperson said: “As soon as we were informed of this incident, we investigated. The offenders were identified and they were instructed to clear the waste.

“There is no excuse for fly-tipping and local residents should not have to tolerate this type of behavior by a small minority of irresponsible people who break the law.

“Cleaning up fly-tipping costs us all money; it’s illegal, dangerous, and potentially harmful to health; it spoils our enjoyment of the surroundings and can cause serious pollution of the environment.

“If you pay someone to remove waste from your home or business, remember to check that the person or company who’s taking the waste away is a Registered Waste Carrier and always ask for a detailed receipt.”

Residents who see someone fly-tipping have been advised to note the following details:

• The date, time, and place where the tipping is taking place or has occurred.

• What the waste is and how much of it there is.

• A description of any vehicles involved and the registration number.

The incident can then be reported to the council.

The council spokesperson added: “We record all reports of fly-tipping. Investigations in the Fly Tipping Wales statistics relate to when an offender can be identified.”

Colwyn Bay...Conwy council investigated 0.6 per cent of fly-tipping incidents in 2021-22

And our forced monthly bin collections don't help either! Most people I know have given up reporting Fly-tipping! FOLLOWING a serious ...